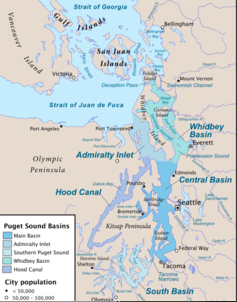 Whudge
A different term for Puget Sound, used by a number of Native Americans and environmental groups, is Whulge (or Whulj), an anglicization of the Lushootseed name x̌ʷə́lč, which means "sea, salt water, ocean, or sound". (Wikipedia)

‘The border is this imaginary line’: why Americans are fighting mining in B.C.’s ‘Doughnut Hole’
Logging permits in the Skagit River headwaters will no longer be issued by the B.C. government but mining exploration is causing friction with Americans downstream. We travelled the river to meet the people fighting an Imperial Metals permit. Christopher Pollon reports. (The Narwhal)

How to Exorcise the Ghosts of Crab Traps Past
In New Jersey, crabbers and scientists have found a local solution for a worldwide ghost gear problem. Dani Leviss reports. (Hakai Magazine)

OceanGate raises $18M to build a bigger submersible fleet and set up Titanic trips
OceanGate says it has raised $18.1 million in new investment, laying the financial groundwork for an expansion of its fleet of deep-sea submersibles and setting the stage for dives to the 108-year-old Titanic shipwreck in 2021...This is shaping up as a rebuilding year for the nearly 11-year-old venture, based in Everett, Wash. The main task on the agenda is to build two new submersibles capable of diving as deep as 6,000 meters (3.7 miles), which is more than a mile deeper than the part of the North Atlantic ocean floor where the Titanic is resting. Alan Boyle reports. (GeekWire)

--
"Salish Sea News & Weather" is compiled as a community service by Mike Sato. To subscribe, send your name and email to msato (@) salishseacom.com. Your email information is never shared and you can unsubscribe at any time.

Posted by Salish Sea Communications at 3:54 AM