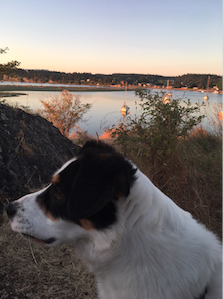 Salish Sea News and Weather will take a break and post when able to. Be back to a regular weekday schedule in September. Enjoy the rest of the summer. Be well! Mike Sato.

Groups sue Boeing over Duwamish River contamination
A new lawsuit says the Boeing aircraft company is poisoning the Duwamish River by pumping out pollution that is far and away above the legal limit. KOMO-TV reports environmental groups Puget Soundkeeper and Waste Action Project say the Military Delivery Center plant in Tukwila is a hotbed for highly toxic polychlorinated biphenyls, or PCBs, which flow out as stormwater runoff and then enter the food chain. The groups are suing Boeing on grounds that it is violating the Clean Water Act. (Associated Press)

Trump’s August Assault on Climate Policy
This summer has brought record-breaking heat around the world, and no slowdown in the Trump Administration’s systematic undoing of climate regulations. On August 2nd, the Environmental Protection Agency and the National Highway Traffic Safety Administration jointly proposed freezing the fuel-economy standards for cars and light trucks that were adopted under President Obama. On Tuesday, the E.P.A. unveiled the Affordable Clean Energy (A.C.E.) rule, a proposal to neuter Obama’s Clean Power Plan, which was designed to decrease carbon emissions from coal-powered electric plants. Together, these policies are as abominable as they are unsurprising: they represent the fossil-fuel industry’s warmest fantasies, and a fulfillment, more or less, of various Trump promises. Carolyn Kormann reports. (New Yorker) See also: Cost of New E.P.A. Coal Rules: Up to 1,400 More Deaths a Year Lisa Friedman reports. (NY Times) And also: New Trump rule to aid coal-power plants unlikely to slow Northwest push for cleaner electricity   Hal Bernton reports. (Seattle Times)

We're Getting Better at Saving Seabirds After Oil Spills
A new study of brown pelicans after the Refugio oil spill in California shows how far oil rehabilitation techniques have come in the last few decades.... Perhaps the biggest advance oil-spill wildlife rescue has made in the last two decades...is recognizing that when a bird comes in covered in oil, cleaning isn't the first thing it needs. A bird like that hasn't been able to eat. Because seabirds get all of their water from their food—they can't drink seawater—it's dehydrated too. An oiled bird now first gets fluid, food, and heat to counteract the effects of oiling, which mats their feathers and exposes their skin to the cold. Francie Diep reports. (Pacific Standard)


Grapeview shoreline sale intended to protect salmon habitat
Great Peninsula Conservancy hopes that a small parcel in Grapeview will have a big impact on Chinook salmon. The nonprofit conservancy purchased 2.5 acres on McLane Cove near Grapeview in Mason County this month, a narrow strip that includes 1,200 feet of undeveloped shoreline that serves as a nursery for young Chinook and other salmon. Aria Shephard Bull reports. (Kitsap Sun)

Policy pivot: A new emphasis on restoration to protect Puget Sound
For years, a commonly used tactic for protecting threatened and endangered animals in Puget Sound was to cordon off areas to fishing.... But protecting Puget Sound is not just about recovering certain species of fish. As the region continues to grow, it is also about protecting the livelihoods and diverse cultures of the people who live there, and balancing their needs with the needs of the natural world. A team of University of Washington researchers and their collaborators... found that policies are shifting toward restoration projects that include input from more groups and offer a range of benefits to Puget Sound, including flood control, salmon recovery, recreation and habitat protection. The researchers published their results online in June in the journal Ocean and Coastal Management. Michelle Ma reports. (UW Today)

Seattle chef Renee Erickson pulls king salmon from menu
A Seattle restaurateur has stopped offering chinook salmon at her restaurants. Renee Erickson, chef and owner of a group of restaurants, including The Walrus and the Carpenter in Ballard, said she made the decision after learning about the plight of J50, the young, ailing orca whale. Ruby de Luna reports. (KUOW)

--
"Salish Sea News & Weather" is compiled as a community service by Mike Sato. To subscribe, send your name and email to msato (@) salishseacom.com. Your email information is never shared and you can unsubscribe at any time.

Posted by Salish Sea Communications at 7:00 AM