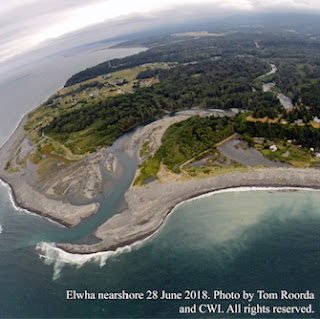 Two deaths, no births for Southern Resident orcas over the past year
Two deaths — no births. The annual census of Puget Sound’s resident orcas shows a continuing decline in their population, as the normally social killer whales focus their attention on finding enough food to survive. Chris Dunagan reports. (Watching Our Water Ways)

Shell of invasive crab found in Fidalgo Bay
The shell of an invasive European green crab was found Thursday along the Fidalgo Bay shoreline. This is the third year Fidalgo Bay has been monitored for green crabs, but the first time evidence of one has been found. Washington Sea Grant and the state Department of Natural Resources began monitoring for the invasive crab species in April. This year, they are surveying 11 beach sites in Skagit County and several others throughout northwest Washington. Kimberly Cauvel reports. (Skagit Valley Herald)

Port Angeles plastic bag law goes into effect Monday
Port Angeles shoppers likely will notice a change at the checkout this week. Merchants will be required to charge at least a nickel for any bag provided at a checkout when the city’s Bring Your Own Bag law takes effect in Port Angeles on Monday. The Port Angeles ordinance, which the City Council approved by 4-3 vote in April, prohibits grocery, retail and convenience stores from providing thin-film plastic carry-out bags at the point of sale in the city limits. Rob Ollikainen reports. (Peninsula Daily News) See also: Plastic bags: Shop assistant 'grabbed by throat' as Australia ban starts  (BBC)

Bellingham's newest waterfront park is open. Here's why officials think it is safe
After years of cleanup and preparation on Bellingham's downtown waterfront, the city is nearly ready to officially open its newest park. The beach portion of Waypoint Park opened to the public in late June but finishing touches are still being made on a playground, said Gina Austin, project engineer for the City of Bellingham. The completion of the playground is weather dependent; it needs a few days of dry weather to make sure the playground surface cures properly, she said. The park is also home to Waypoint, a former industrial acid ball tank turned to sculpture, as well as walking and cycling trails to other parts of the waterfront district. The park is adjacent to the renovated Granary Building, which is currently available for lease. Plans are in the works for a formal celebration later this summer. Dave Gallagher reports. (Bellingham Herald)


State eyes habitat on Tahuya Peninsula for preservation
The Department of Natural Resources would like to conserve 1,700 acres of natural habitat on the Tahuya Peninsula, including five miles of Hood Canal shoreline, in an effort to preserve lowland forests and estuary habitat for fish, wildlife and future generations. The state agency has proposed the creation of a Dewatto Natural Resources Conservation Area and has designated a boundary around the Dewatto Bay watershed, Little Dewatto and along North Shore Road, adjacent to the DNR-managed West Tahuya forest trust lands. Arla Shephard Bull reports. (Kitsap Sun)


--
"Salish Sea News & Weather" is compiled as a community service by Mike Sato. To subscribe, send your name and email to msato (@) salishseacom.com. Your email information is never shared and you can unsubscribe at any time.

Posted by Salish Sea Communications at 6:51 AM